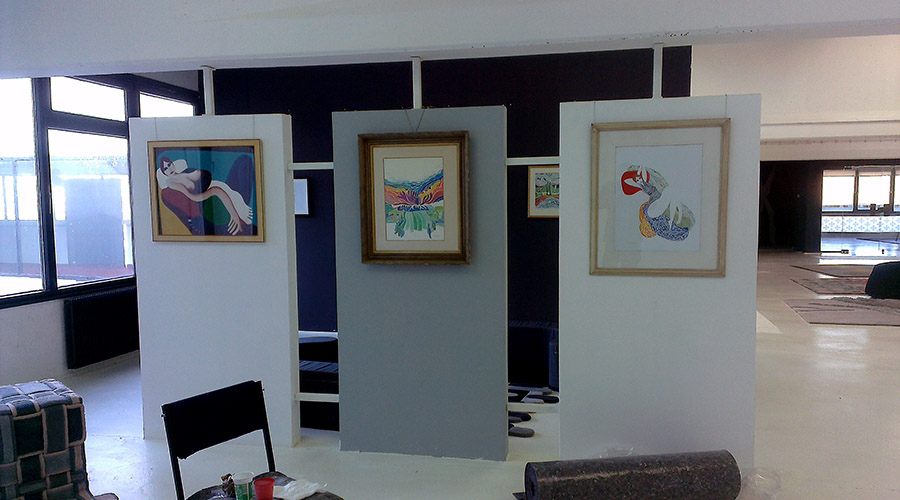 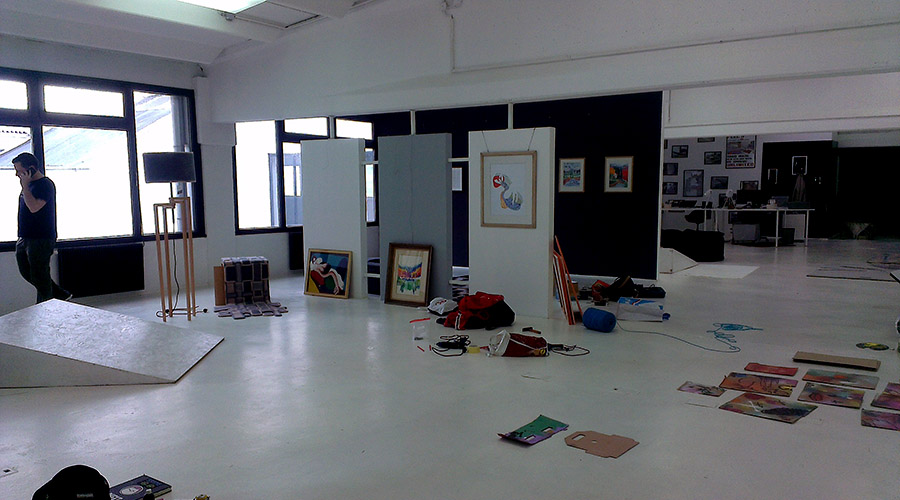 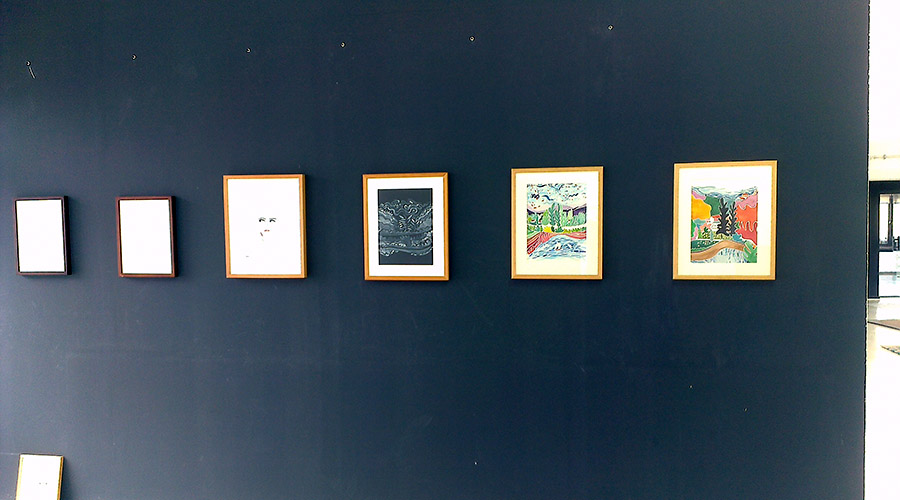 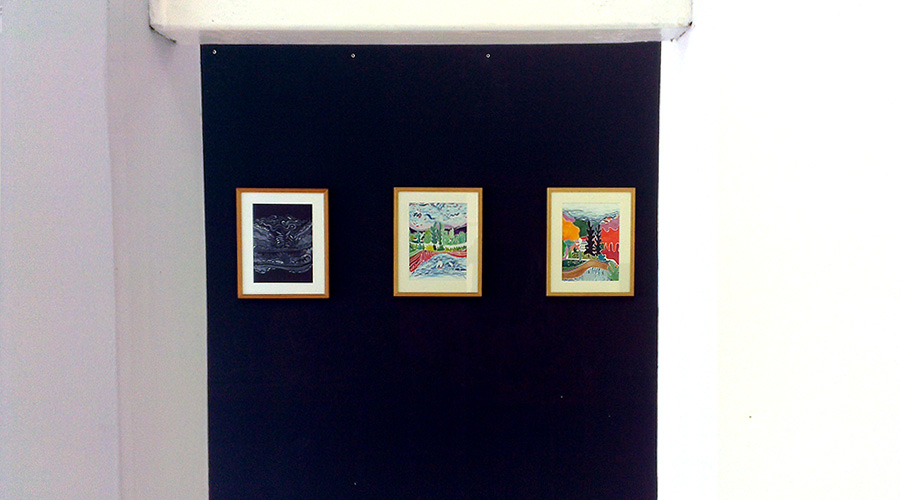 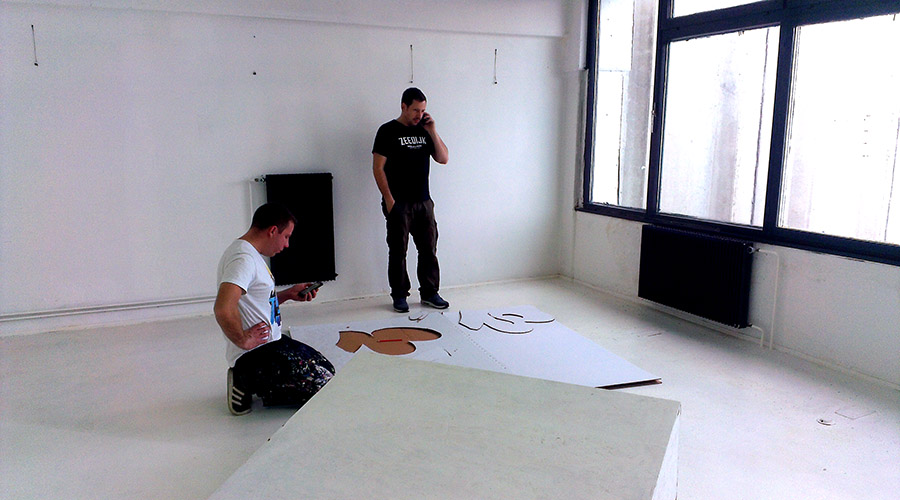 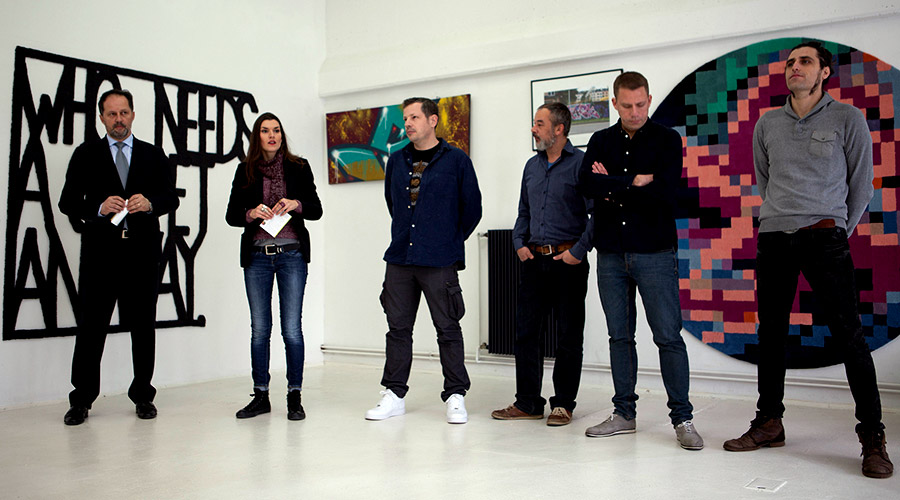 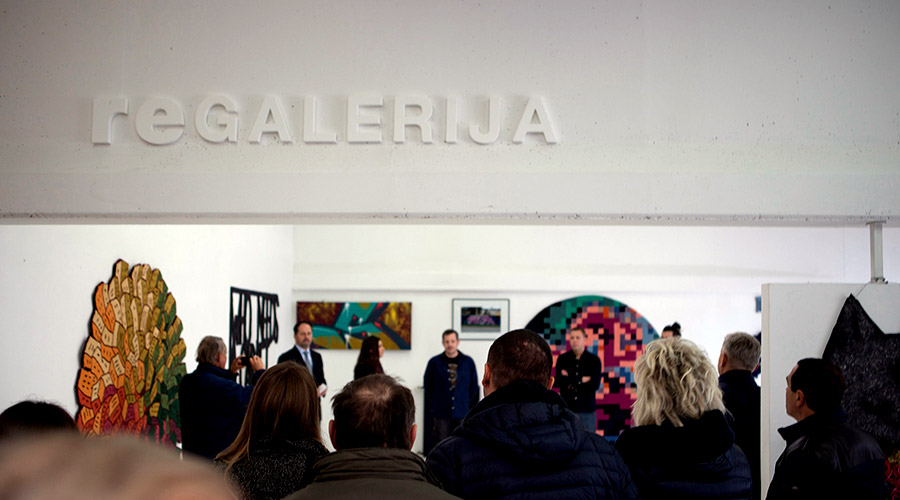 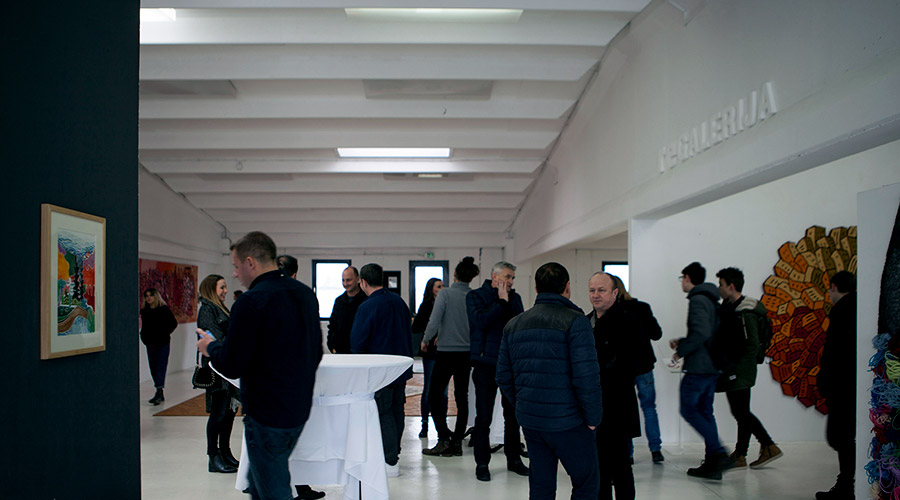 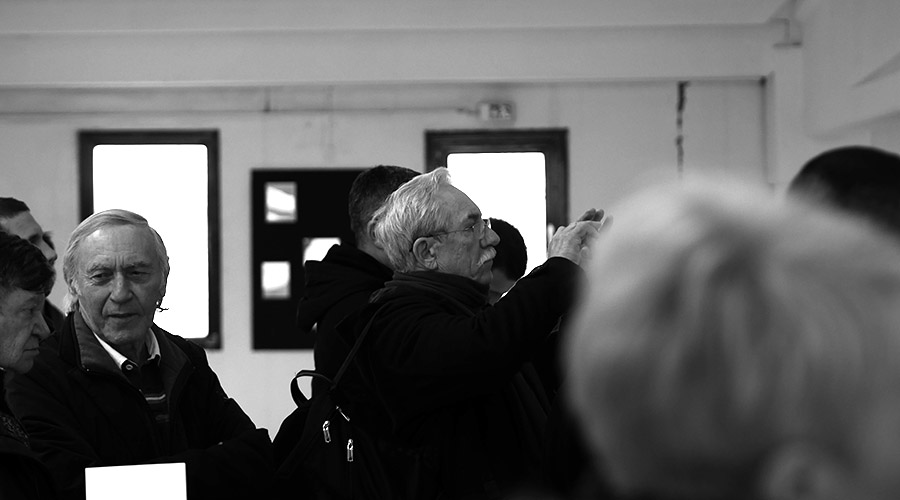 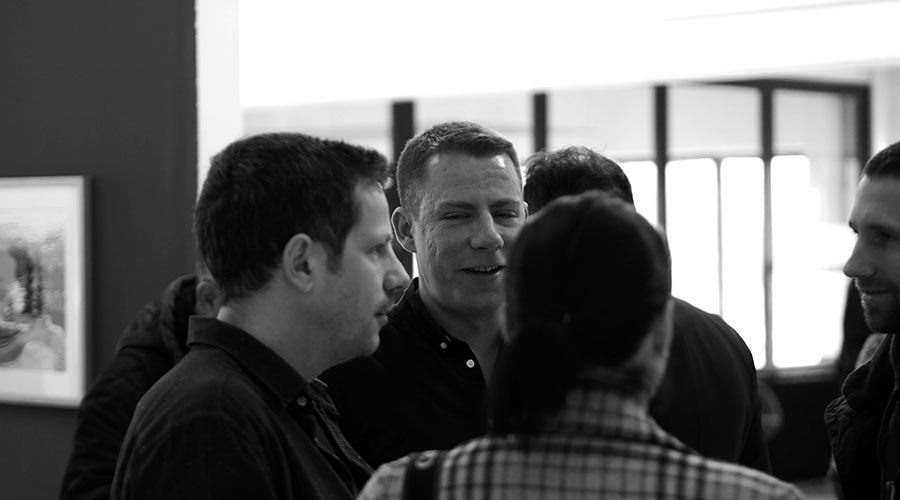 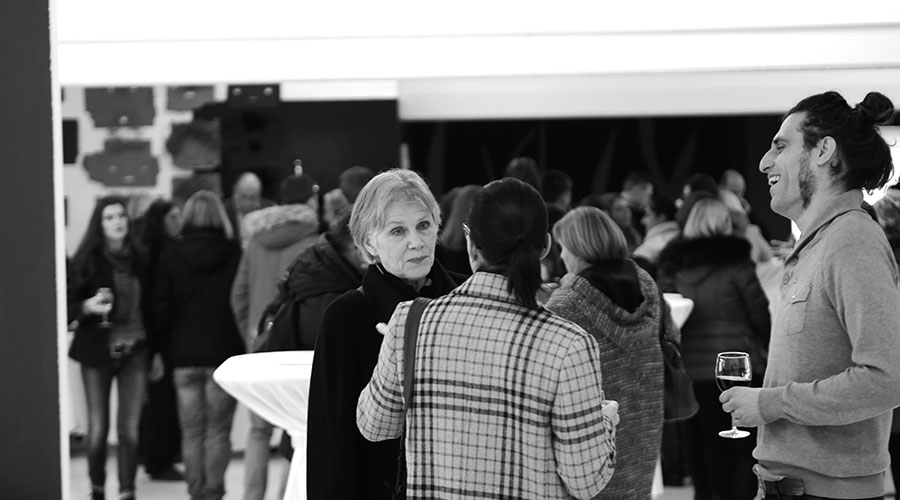 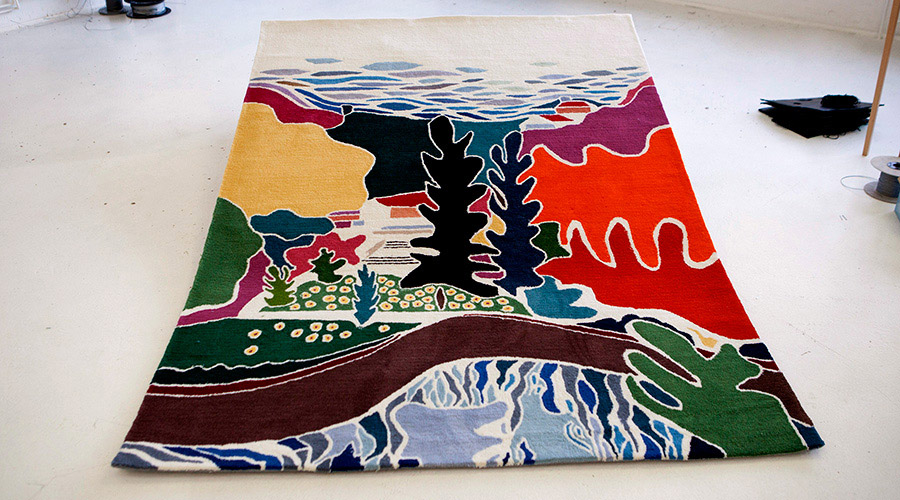 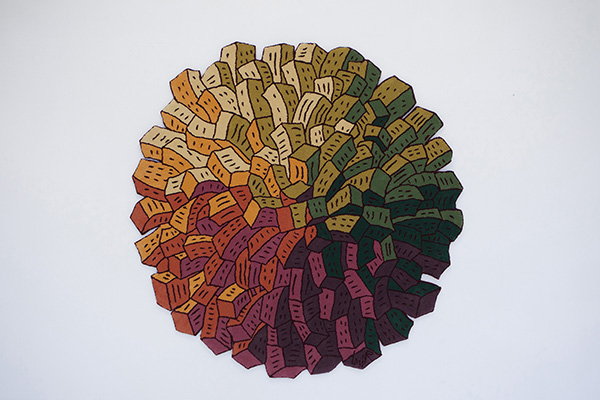 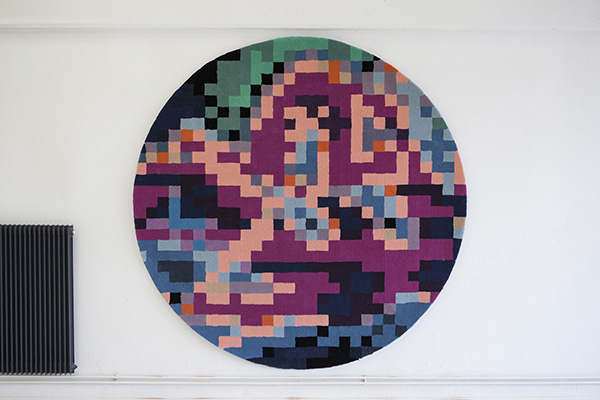 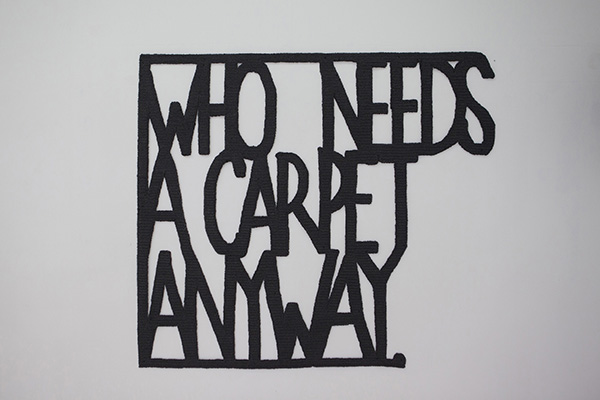 Who needs a carpet..
Vladimir Tomić 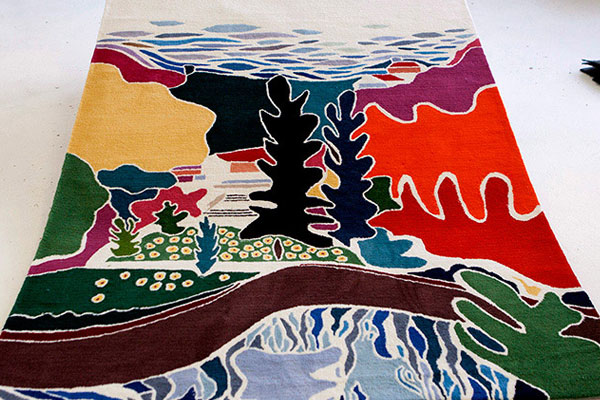 Zorgvliet
Ronald Lindgreen
Lunar's (Slaven Kosanović) "Spheric city" showcases two of his signature motifs & stylized skyscrapers, in this case they are formed in a circular shape, and highly colorful shades. Smack (Ivo Kosanović) decided to take out details of an existing letter style, blew it up and pixelized it to make his work, a "Smosaic". Mosk (Vladimir Tomić), an artist who spends his time between painting and his band Moskva, decided to jump out of the mold with his "Who needs a carpet anyway", a complete opposite of what we expect from a carpet, and yet the very best thing we expect from an artwork. Ronald Lindgreen brought a dose of classical art in his work, "Zorgvliet", in which he tries to evoke the tradition of modern European paintings, simultaneously developing his own style.

The idea was to push the authors out of their comfort zone, and try working with a new medium wool. As a result, Mosk moved away from his realistic scenography and his dreamy graffiti landscapes, Ronald from his calming oil painted nudes and Smack from his photography and letter styles, an integral part of his usual MO.

History of Regeneracija
In 1954 a company was found dealing in the gathering, sorting and processing of textile waste. In 1955 the company was renamed Regeneracija. In 1964 the first production line was installed for the production of nonwoven fabrics made from recycled textile fibres from our own production. The logo two wolfs fighting for a piece of fabric, as a symbol of the "WOLFER" machine for tearing fabric has been in use since 1968. Carpet production began in 1967, and in 1990 the company was listed in the Guinness World Records as the manufacturer of the largest tapestry in the world, with an area of 1, 242 m2. In 1989 the company showed its dedication to environmental protection and energy efficiency by installing the first and only textile waste pyrolytic incinerator in the region. The war and its effects (disintegration of the market, lost companies in Bosnia and Herzegovina and Serbia, transfer to war production) lead Regeneracija to the very brink of survival. One of the most significant events to occur in the recent history of the company was the successful privatization by the employees and the company's German strategic partners in 2005. The results were a significant increase in export, full production capacity, the foundation of Regeneracija GmbH in Waiblingen in 2008 and the takeover of the company CO DESIGNERS Teppiche in 2014.