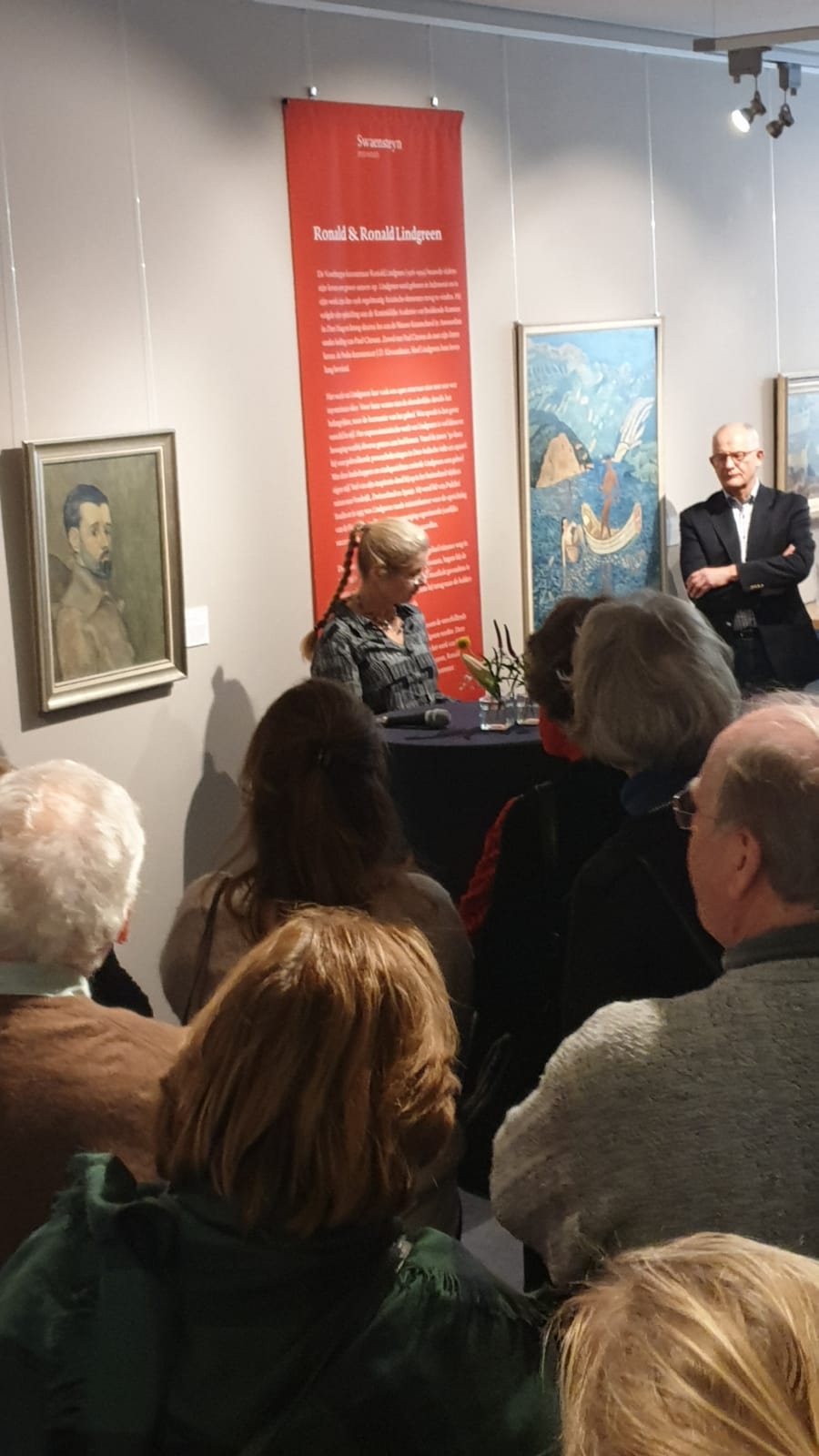 What an honor to be here at the opening of the exhibition of Ronald and Ronald Lindgreen, one is my grandfather, the other my cousin. Both have become skilled in painting. I think they are not namesakes for nothing. Both are great people.

If you look back on the life of grandfather Ronald, it is striking how driven he was his whole life. How incredibly much he has painted. And how important he thought it was to continue to develop oneself.
In addition to painting, he almost always studied something.
He chose his own path.

Grandfather Ronald was born in 1916 in Tjimahi, Indonesia.
When he was 10, he came to the Netherlands with his parents and sisters because his father became ill. His father died shortly after they arrived, and Ronald had to go to a boarding school where he attended high school. At the age of 12 he received a paint box and began to paint portraits. He also played the violin. When he got his diploma, a guardian told him: You can become anything as long as it is not an artist.
Later he wrote: and I succeeded!
The choice between painting and music was difficult.

He studied at the Royal Academy for Visual Arts in The Hague. There he met a teacher, Paul Citroen. A very important person to grandfather, with whom he would always remain friends.
Paul Citroen was the founder of the New Art School in Amsterdam, the first Free Academy in the Netherlands. Ronald was fascinated by the revolutionary insights of teaching and decided to continue studying there.
In the spring of 1938 Ronald made an excursion to Paris, which made a big impression on him. There was the life of the great artists.
At the end of 1938 Ronald left for Paris to study under the wing of Kirszenbaum, a Polish-Jewish painter. During this time he learned many things, painted a lot and also had exhibitions. Kirszenbaum appreciated the Asian elements in his work and taught Ronald to be proud of it and encouraged him to develop it further.
In the summer of 1939, a study trip led by Kirszenbaum in Brittany was abruptly ended by the beginning of the war.

Ronald returned to the Netherlands with all of his work, he had painted so much that he could immediately exhibit in the art gallery Kunst van onze tijd in The Hague. Ronald's works were emotive expressions. He painted people and objects using oil paint. The shapes are vague and without contour, painted with small spots in matte pastel shades.
During the war he could not make a living with art and became an official for the Dutch Fisheries Center.
In 1940 he had met Elly Vink and her daughter Marya. They got married in 1944. Elly became ill and Ronald became the guardian of Marya during her illness. Unfortunately, Elly died in 1945.

1946-1952
After the war he became a representative of the Dutch Fisheries Center sent to an opening of an exhibition by Cees Bolding. Cees Bolding was an old teacher with whom he had always kept in touch. He finally met artists again, but also Phemie. He later married Phemie and they had 2 sons. Phemie supported him throughout his life as an artist.

In 1946 Ronald went to search for Kirszenbaum in Paris. They found each other. From that time on he regularly went to work in his studio. Kirszenbaum was very important to Ronald. He needed reflection on his work. From 1947 his work changed. He painted portraits in an expressive style and painted a lot of motives with Indian ink in combination with watercolor on paper. From there on he started painting more and more with watercolors.

1952-1955
In 1952 he was invited for an exchange program between Dutch and French artists. Phemie said: Menton is the place to die, Annecy is the place to live. So Ronald went to Annecy. He enjoyed the landscapes and went back a few times a year to paint there (until 1958). He exhibited his work in the Netherlands and Paris.

In 1955 Ronald was Co-initiator and founder of The Hague Aquarellists. This association organized many exhibitions. Ronald was on the board as secretary and treasurer, Phemie was the great organizer, present at all exhibitions behind her table. She knew everyone and also managed to sell a lot of work.

To maintain a family, Ronald went to work at the Staatsdrukkerij. He trained as a graphic artist and studied graphic design. But also gave drawing lessons. He liked teaching, and decided to get his teaching certificates.
From 1961 to 1978 he taught at secondary schools. He allowed his students for a better school experience than he had himself. He also had something to say as a painter.

Ronald and Phemie traveled a lot. Everywhere they visited something was being painted or drawn.
We, as grandchildren, had to learn to ski, they thought. We were taken by grandfather and grandmother to Switzerland or Austria, into the mountains. We were provided with skies and put in a ski school. Grandfather and grandmother usually went for a walk. Grandfather always came back from those trips with new drawings and paintings.
Grandmother was responsible for the organization, while grandfather was a little bit more modest. But when it came to it, he let himself be heard. So for my birthday in Austria I was allowed to find a ski bag. Suddenly grandfather said: you can choose whichever one you want but for that one I would be ashamed.
It was a bag created with seal fur.


1978-1989
At the age of 62 he retired as a high school teacher. He did continue to teach at the Free Academy and at the Voorburgs Atelier. Ronald devoted himself entirely to making art.
There was a lot of traveling for the purpose to paint and there was a lot of painting to allow for travel. He painted everywhere, France, Spain, Austria, Switzerland, England and Yugoslavia.
In 1988 they made a trip to Corsica. On the last night of their stay there, their rental car was stolen with all the works he had made there. As a result the exhibition in Pulchri Studio had to be canceled.


1989-1999
After working for 20 years in a naturalistic way, in 1989 he suddenly said goodbye to this style.
Inspired by music and musical instruments, he made abstract figurative compositions with geometric shapes.
I remember well that we came to visit and we immediately had to go upstairs to admire his new painting. Grandfather was proud of his completely new work. He was glad to have found new ways.
He continued to do this until the end.

Ronald was a very modest man, a man of few words who would never put himself in the center. He was very involved and had an eye for the people around him. Grandson Ronald was born in Celje, former Yugoslavia, now Slovenia. Like his grandfather, he came to the Netherlands as a child. Ronald grew up with the art of his grandfather. He often came into his studio and of course visited all his exhibitions. After high school he went to study at the Willem de Kooning Academy in Rotterdam where he graduated in 2001 as an autonomous painter.

Ronald was inspired by grandfather's portraits and went deeper into portrait drawing. He sometimes needed only a few lines for a striking portrait. Almost snapshots.
Then he immersed himself in the fantasies of female bodies. Painted in oil paint, tightly set up, in full motion.
In order to better understand the expressive handwriting and choice of colors of his grandfather's paintings, he chose a Zorgvliet as a study object. Through this study, he developed a completely new style and is now painting landscapes in the vicinity of his house in Zagorje, Croatia. Something he had never thought of himself to be doing. Through this a new generation of Zorgvliet's has emerged, both with their own character. Both signed by Ronald Lindgreen.

Enjoy all this wonderful work.